A parent’s incarceration has long-lasting effects on children’s health, according to researchers from Ann and Robert H. Lurie Children’s Hospital of Chicago.

A  study published in Pediatrics this month demonstrates that young adults who had a parent incarcerated during their childhood are more likely to skip needed healthcare, smoke cigarettes, engage in risky sexual behaviors, and abuse alcohol and prescription and illicit drugs. 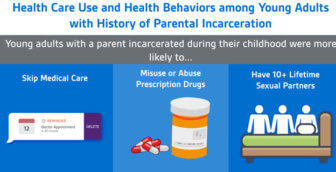 Researchers observed different effects depending on the sex of the incarcerated parent. Children whose mothers were incarcerated were twice as likely to receive medical care from the emergency department rather than a primary care setting.

A mother’s incarceration also doubled the likelihood that young adults would engage in prostitution.

Children whose fathers were incarcerated, meanwhile, were 2.5 times more likely to use intravenous drugs.

“It’s possible that because these young adults are more likely to forgo medical care and engage in unhealthy behaviors, they are at higher risk to develop these physical and mental health conditions,” says lead author Dr. Nia Heard-Garris, MSc, a pediatrician at Lurie Children’s Hospital and Instructor of Pediatrics at Northwestern University Feinberg School of Medicine, in a statement announcing the study’s findings.

The U.S. has the highest incarceration rate in the world, and more than five million children in this country have had a parent in jail or prison. In the study, 10 percent of the 13,000 young adults surveyed had a parent incarcerated during their childhood. Participants were 10 years old, on average, the first time their parent was incarcerated.

“With the climbing number of parents, especially mothers, who are incarcerated, our study calls attention to the invisible victims – their children,” says Dr. Heard-Garris. “We shed light on how much the incarceration of a mother versus father influences the health behaviors of children into adulthood.”